At some point, every multiplayer application requires the server to act as an authority on the state of a room. You may have objects that only specific users can access, a physics state that you would like to enforce, or data that should be reset when a user disconnects from a room.

Traditionally this is done by writing custom, server-side logic that needs to be deployed alongside the server. However, this slows iteration time significantly and requires you to redeploy your server with each update. Normcore instead provides an API that makes the most common server-authoritative operations possible without deploying a custom server.

The two most useful tools regarding server authority are ownership and lifetime flags. Ownership lets you control who has the ability to modify a model, and lifetime flags tell the server when a model should be automatically deleted and when it should persist between sessions.

Normcore uses a datastore to track all state in a room. The datastore itself is made up of model objects. Every model in the datastore, including child models, can have an owner with which it is associated.

By default, a model has an ownerID of -1, which denotes that it has no owner. When a model is unowned, it can be modified by anyone in the room. However, when a model is owned by a client, the server only lets the owning client make changes to it or to any of its child models.

# How ownership is enforced

Models can have other models as children, and the ownership settings of a parent are enforced on all children. If a model is owned by one client, all other clients are blocked from making changes to the model or any of its child models.

Let's take a look at the hierarchy here:

Starting with the hierarchy, we have a VR Player game object at the root, and it has a child game object for the head and hands. Each game object has a RealtimeView and a RealtimeTransform and potentially another RealtimeComponent or two.

# Requesting ownership of a RealtimeView

Let's dive into some code examples. The most straightforward methods for changing ownership are RequestOwnership() and ClearOwnership():

It's worth noting that RequestOwnership() and ClearOwnership() take effect immediately, but if the server blocks the request—say, because preventOwnershipTakeover is true or because the view's parent is owned by another client—then ownership and all changes that required ownership will be rolled back.

It is also possible to request ownership immediately using the ownedByClient field of Realtime.Instantiate():

This ensures the RealtimeView on the root of the prefab is owned by the local client when instantiated. It's worth noting that this is equivalent:

Even though this example calls RequestOwnership() after the object is instantiated, Normcore will combine it with the instantiate call before sending. On remote clients, the RealtimeView will be instantiated with this client as the owner.

# At runtime with the Unity inspector

If you're trying to debug ownership settings at runtime, the RealtimeView inspector includes Request Ownership and Clear Ownership buttons that function like calling RequestOwnership() or ClearOwnership() in code. 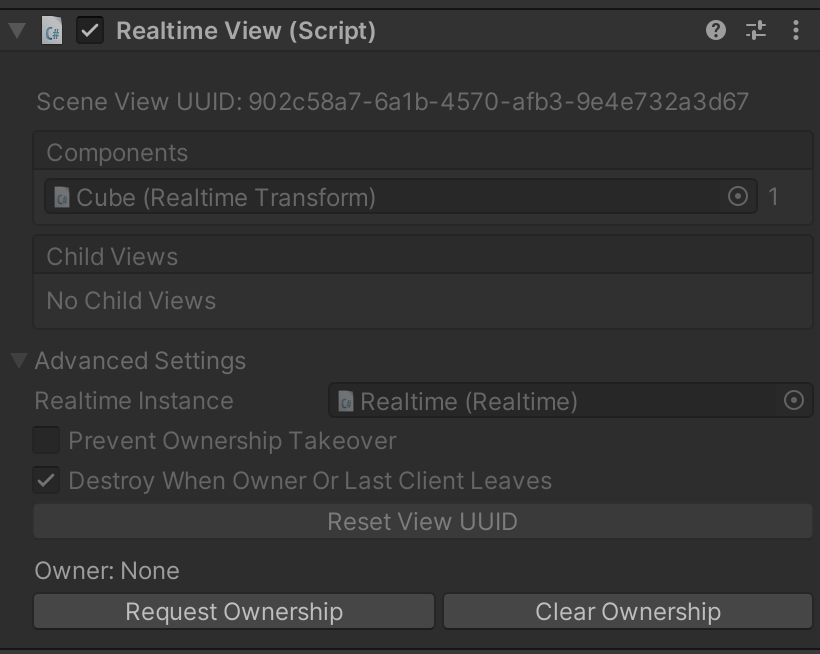 # Prevent ownership takeover of a RealtimeView

By default, anyone can request ownership of a RealtimeView at runtime. The server will approve this request unless a parent RealtimeView is already owned by another client. However, this can be controlled with the preventOwnershipTakeover flag.

When this flag is true on any model, the server will deny any client’s attempt to change the ownership of an object in that model unless it has no owner.

However, before you can use this on a custom RealtimeComponent, you'll need to make sure your RealtimeModel includes a meta-model.

If you haven't done so already, it's worth reading our realtime component page. The page fully explains the relationship between RealtimeComponent and RealtimeModel. In Normcore, all state is stored on the RealtimeModel—ownership + lifetime flags are no different. All ownership calls to RealtimeComponent just update the state of the model to reflect the new owner. However, for ownership to work, you need to compile your model with a meta-model:


The only change needed is the addition of createMetaModel: true in the RealtimeModel attribute constructor. This tells Normcore to compile your model with a meta-model, which is where all ownership state will be stored so it may be sent to the server.

Lifetime flags tell the server how long the state for a model should be retained. Models can be set to persist between sessions, or they can be automatically deleted when the owner or the last client leaves the room.

If you're writing a collaborative application, you may want things like objects or brush strokes to persist between sessions. However, you might want a model that represents game state like the current score to reset to zero after everyone leaves. If you have prefabs that represent players, you may want them to be destroyed when a player disconnects. Lifetime flags are used to denote how the server should treat each model in the datastore.

We always recommend you use lifetime flags instead of trying to write this logic yourself. If you write logic that tries to make datastore changes when a player gets disconnected, there's no guarantee they will run successfully, especially if a user's connection is improperly terminated. However, the server will always ensure lifetime flags are honored, regardless of whether or not a client's connection was closed properly.

# Instantiate a prefab that persists between sessions

Whether you're building a collaboration tool or an MMORPG, you'll likely have objects that should stick around between sessions. In Normcore, all you have to do is use the destroyWhenOwnerOrLastClientLeaves flag to denote that the object should persist. Let's take a look at an example:

Overall, then, this is pretty simple! And the same applies to RealtimeView components in the scene. If you'd like their state to persist between sessions, just flip the "Destroy When Owner Or Last Client Leaves" option to false under Advanced Settings.

# Destroy a prefab when a client disconnects

Let's say we're going to instantiate a prefab to represent our player. In this scenario, we'll want the server to destroy it automatically if we get disconnected. We can accomplish this entirely using the optional flags in Realtime.Instantiate():

This example gets a reference to the Realtime component and registers for the didConnectToRoom event. When we successfully connect to the room, we instantiate the "My Player" prefab to represent our local player. The prefab is set to be owned by this client and to be destroyed when the owner—the local client, in this case—is disconnected. For extra safety, we've also set preventOwnershipTakeover to true to prevent other clients from accidentally taking over ownership of this prefab or any of its child components or models.

And that's it. No custom logic is needed to destroy the prefab; the server takes care of that for us and notifies the remaining clients.

I am so glad you asked. We at Normal work hard on this stuff, and if we do our jobs perfectly, no one will even notice all of our effort. This isn't the coolest hidden gem of Normcore, but it is a neat implementation detail. (Yes, I am encouraging you to ask me more questions about how the internals of Normcore work if you ever see me on the street. There are a lot of cool details hidden in Normcore!)

Models in Normcore store state, and as far as the server is concerned, it doesn't really matter what that state represents. The server just needs to ensure that the state is in sync with all other clients. However, there comes a time in every model's life when it has some state that the server does care about. Maybe it's instructions on how to add an item to a collection or on which client can make changes to a model. This is where the meta-model comes in.

A meta-model is a child model that the server is designed to parse and use to apply custom properties to the model. In the case of ownership and lifetime flags, these properties exist on the meta-model and the server loads them into memory and uses them to accept or reject changes to the datastore.

Collections such as RealtimeDictionary, RealtimeSet, RealtimeArray, and StringKeyDictionary also use the meta-model to signal to the server that they are special models that behave more like collections.

That's all folks! We hope you enjoyed this page on ownership and lifetime flags in Normcore.